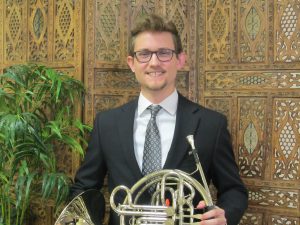 Mr. Patrick Greene began playing the French horn in the 6th grade in band and fell in love with music by 10th grade, deciding his senior year to continue studying music in college with interests in both performing and teaching music at a high level.  Mr. Greene is now a recent graduate of Troy University in Troy, Alabama, earning a Bachelor of Instrumental Music Education in December 2019.

While earning his degree, Mr. Greene played the French Horn in the top performing wind ensemble at Troy University under the direction of Dr. Mark Walker.  He served as the principle horn for the ensemble’s tour through the state of Florida in 2018, performing at various schools and venues along the way, including the College Band Directors National Association conference in Tampa, Florida.

Finally, Mr. Greene is passionate about the areas of aural skills and music theory, and takes great joy in the studying and teaching of music’s fundamental elements which not only improve our understanding and performance of that music, but enhance our experience and appreciation of music as a human art.  These fundamental elements include music’s cultural and historical context, which is always important to music’s relevance and influence. He seeks to share the gift of music and its study to any who would receive it.