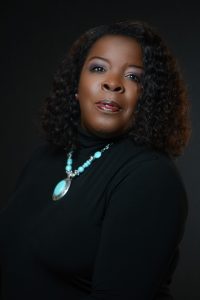 Michigan-born soprano, Iris Fordjour-Hankins holds two degrees in music and is currently in the final stages of doctoral work in voice at the University of Kentucky.  Her undergraduate degree is from Oakwood University (B.A. Piano Performance), followed by the earning of a music-teaching certificate at Wayne State University and an M.A. in music education from Boston University (M.A. Music Education).

Though Iris has spent her career as a music educator, she has been a lifelong student of the classical singing voice.  Her early voice studies were with Dr. Ricky Little, Dorothy Duensing and Dina Winter. And, after winning second place in the 2013 Alltech Vocal Scholarship Competition at the University of Kentucky, the full-ride award allowed her to study in the studios of Dr. Everett McCorvey and Dr. Angelique Clay-Everett.  Iris is now in the studio of Dr. Ginger Beasley in Huntsville, Alabama.

Currently employed as an assistant professor at Oakwood University, Mrs. Fordjour-Hankins teaches individual voice, diction and opera workshop courses to voice students.  Her work there has allowed her to teach undergraduate students with a wide range of vocal abilities.  She welcomes these students into her studio and classes and believes that every opportunity to work with them is an opportunity for both theirs and her own growth.  Previously, she taught vocal music for the Detroit Public Schools, grades preK-12 and believes the 15-year experience has become the bedrock of her skill set as a soloist and voice educator.  Additionally, Iris served for 15 years, as co-minister of music at the Burns Seventh-Day Adventist Church in Detroit, MI where she founded and directed the Excelsiors, a choral group that sang anthems, hymns, spirituals and contemporary religious music.

Iris has sung as an ambassador for the University of Kentucky and Alltech in both the U.S. and China with the mission of singing music that encourages rich cultural exchanges amongst classical singers, spreads goodwill and builds pathways of friendship and collaboration in the musical arts, music education and business.  With the same concept in mind, Iris acts similarly for Oakwood University.  In December 2017, she gave a recital in Kingston, Jamaica as part of a program where of a Dr. Andrew Marshall’s newly composed patois oratorio based on the Jamaican Bible.

As a soprano soloist, it has been Iris’ privilege to sing in various operatic venues, concerts, oratorios, cantatas, churchesand chorales.  Her repertoire includes the works of Strauss, Verdi, Puccini, Handel, Gounod, Mozart, Wagner, Beethoven and Bellini.  Most recently, Mrs. Fordjour-Hankins has performed with the Ars Nova School of the Arts in concert venus featuring operatic music.  She also sings throughout the region as a recitalist and soloist. Her repertoire includes works of Strauss, Verdi, Beethoven and Wagner.  One of her favorite performances was as a featured soloist in Puccini’s “Messa di Gloria” along with the premier of Eduard Perrone’s new mass entitled “Missa-Fountain of Beauty” (2013) at the historic Assumption Grotto Catholic Church in Detroit, Michigan.  Other solo engagements include the performance of Rossini’s “Inflammatus et Accensus” and “I Will Give Thanks” for the 2007 National Baptist Convention held in Detroit.  She has been a featured artist for Tuesday Musicale of Detroit, a classical musical society dedicated to performance and arts education.  For this group Iris has performed arias and duets from several operas, notably:  Aîda, Norma, La Forza Del Destino, Fidelio, Manon Lascaut and Tannhäuser.  Additionally, she was a featured soloist in concert with the ensemble Committed, the 2010 Winner of NBC’s show, The Sing Off.

Iris is married to Ernest Hankins, III.  They have two children, Iman Isabella (age 17) and Ernest, IV (age 14).  Iris considers her family to be her greatest accomplishment.