Marty Thomas and Rachel Potter, both highly celebrated recording artists and Broadway performers. Additional performances by Ars Nova students, previews of upcoming productions, and a live band made up of some of Huntsville’s best musicians will round out the evening. Catering will be provided by Good Company Cafe, a young female-owned business in South Huntsville. It will truly be a night to remember! 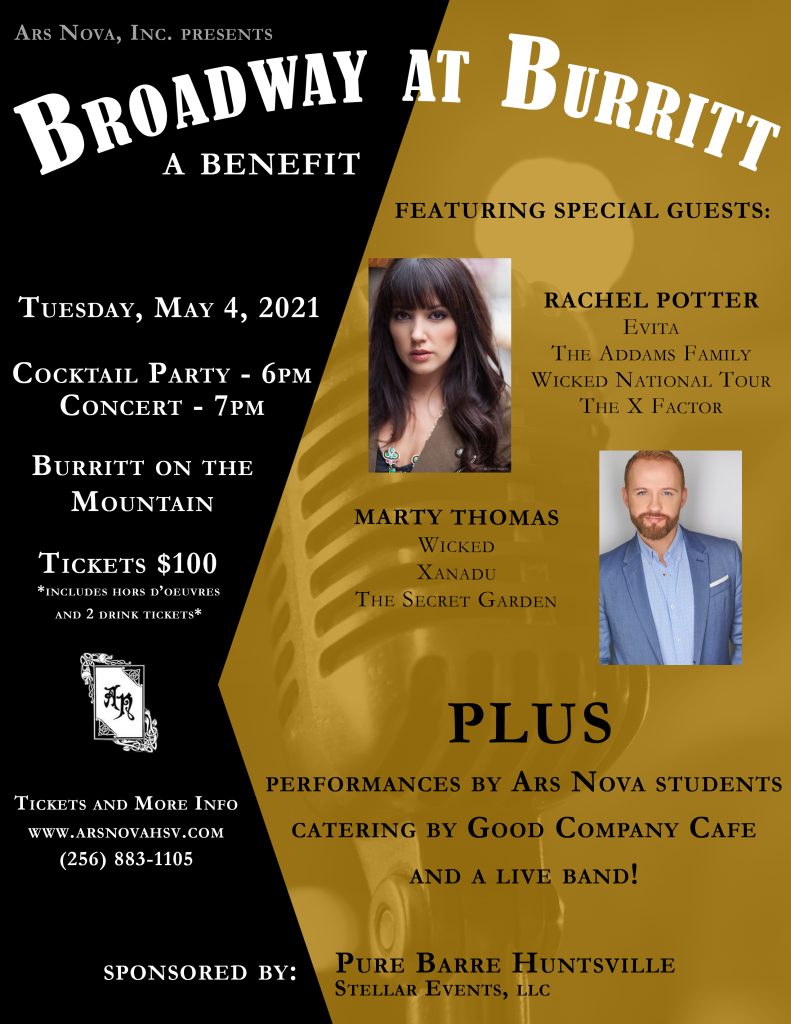 Marty Thomas is a Grammy nominated recording artist who made his Broadway debut at the age of 11, playing Colin in The Secret Garden. He has also been seen in the Broadway companies of Wicked and Xanadu, as well on TV shows like “Grace and Frankie” and “2 Broke Girls.” He has opened for Grace Jones and Patti Labelle, toured internationally with the famed gospel show “Queen Ester Marrow and the Harlem Gospel Singers,” and sung backup vocals for artists like Barry Manilow, Debbie Gibson, Martha Wash, Billy Porter, Shoshana Bean, and Keala Settle – just to name a few. www.martythomas.com

Rachel Potter made her Broadway debut as Wednesday Addams in The Addams Family, playing opposite both Bebe Neuwirth and Brooke Shields as Morticia. She then went on to originate the role of the Mistress in the revival of Evita and tour with Wicked as the understudy for Glinda. Rachel began her professional career as a performer at Walt Disney World, singing as Ariel, Belle, and Nemo, and was a top-12 finalist on Season 3 of FOX’s “The X Factor.” She has performed as a guest artist with symphony orchestras across the country, as well as with world renowned acapella groups, VoicePlay and Voctave. www.rachelpottermusic.com

*In the event of inclement weather, the event will be moved inside. We ask that all guests be prepared to follow all Covid-19 safety precautions, including wearing a mask when social distancing is not possible*